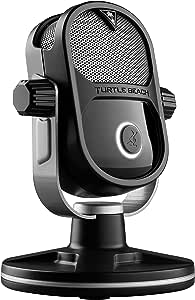 The Turtle Beach Stream Mic is a first-of-its-kind professional desktop microphone created for gamers streaming directly from their consoles. With the Stream Mic, players can livestream gameplay from their Xbox One and PlayStation4, as well as from a PC or Mac thanks to universal plug-and-play compatibility. Additionally, the Stream Mic features adaptive mic patterns and fully customizable software, while a dual-capsule mic array with advanced digital processing supports multiple pick-up patterns for different applications and environments, and a zero-latency headphone output provides accurate monitoring so anyone can stream like a pro. The Turtle Beach Stream Mic will elevate your Twitch, YouTube and MLG.tv streams to a whole new level.welcome to the big time.

The Turtle Beach Stream Mic is a first-of-its-kind professional-quality desktop microphone created for gamers streaming content directly from their consoles. With the Stream Mic, players can commentate on livestreamed gameplay from their Xbox One, PS4 Pro and PS4, as well as from a PC or Mac thanks to universal plug-and-play compatibility, while advanced features like Adaptive Mic Patterns, best-in-class digital processing, and a zero-latency headphone output for accurate monitoring means anyone can stream like a pro. Take your Twitch, YouTube and MLG.tv livestreams to all new levels with the Turtle Beach Stream Mic.

NDT_Bull
5.0 de 5 estrellas Very happy young gamer.
Revisado en el Reino Unido el 24 de febrero de 2018
Compra verificada
We bought this Mic to allow our 12 year old to play Fortnite on his Xbox One S with his friends. We were keen to avoid headphones to prevent him chatting to people he does not know. The Mic was extremely easy to set-up and he required no help. The product has been extremely successful and works very efficiently, he has not experienced any echo noises or interference. Overall we are completely satisfied and very happy with this product.
Leer más
A 7 personas les resultó útil
Informar de un abuso
Traducir opinión al idioma Español

UHF
4.0 de 5 estrellas make sure to update the mic and change the settings
Revisado en el Reino Unido el 4 de enero de 2017
Compra verificada
it is honestly hard to say if this is any good or not, it seems to be good at first and have all the different modes on it is useful if empty.

looks good in in the packaging and was light since its made of plastic which depending what you want isnt always great.

its a simple plug in and set as default mic on pc, easy compered to other mics
same with PS4 plug in and set to default and your done, however for the PS4 it picks up everything and its mother on high sensitivity and on low you could blow something up next to it and it might just about hear it.
i havent been able to use it on the xbox one yet since ive had no reason to, sorry.

it is useful will all its different modes (cardioid, bi-directional, hypercardioid, omnidrectional)

the style of it is pretty cool and you can plug headphones in the mic for live playback (stops me from having to shout to hear myself while playing games) and it shows up as a headset on the ps4 if you do set it up like that. you can adjust the volume on the mic its self (the volume that comes though the mic) changing modes is just a button push on the back and if you hold the button you can change it from low sensitivity to high.

the stand/base it comes with adds to its looks.

but its made of plastic so if you touch the very loud buttons whoever your talking to will hear it even the light touch mute button which can be annoying, as said before the mic when used with the PS4 on high sensitivity will pick up everything and on low sensitivity i would need to eat the damn thing for people to hear me, and theres no in between no matter what you do with the mic settings on the PS4, on PC its fine and i have easy control over it and i can set it to auto but you just cant on the PS4 (sorry i havent tried yet on xbox one)

ill try it on the xbox one at some point and update this.

*update* so a firmware update came out a while ago and has improved this mic 10 fold, now the low sensitivity setting on the mic is much better for ps4 as long as its on a stand and not the base it comes with.
for xbox this mic is probably the mic one ive ever used but not with out a few flaws, set up i thought was going to be along the lines of the ps4/pc you plug it in and system did the rest but oh how i was wrong (this might have just been the one i got and not all)
after 30 minutes of trying to figure out why the xbox one didnt like it i reset the mic to factory and plugged it in again and this time it worked fine but the sound the mic was picking up was terrible so i again updated the mic and everything worked fine again, now while i will say this is the best mic ive used for xbox one and i even showed it off to some friends that said the same thing, you could get a even better mic for a little more money but if you have a budget and still want a really good mic this is a great choice

so AFTER the update to the mic

on PC great mic works well and is easy to change any settings to fit with you need.
on PS4 its great in most ways but if you use a 5.1 or 7.1 headset do not plug it into this thing (most have there own USB but still)
on XBOX ONE the best mic ive used be far

the software for changing the settings can be downloaded on the turtle beach website.

G. Jefferson.
4.0 de 5 estrellas WORKS WELL BUT DISAPPOINTING...
Revisado en el Reino Unido el 7 de junio de 2017
Compra verificada
Hi Guys,
Where to start with this Mic, Well It's performance is different between computers.
I used it on my gaming pc I5 6400 16G Kingston Hyper Fury X @ 2400 Asus GTX 1080 TI FE 11g and must admit worked very well, Low Bass but also low Audio this can be passed by upping the microphone settings, Personally i would use it via a separate sound card not built in cards.
When I used it on my Laptop I7 4770 16gig Corsair Vengeance 1600 GTX 860M 4gig WOW Awesome, Not quite sure why but it was there.
However for the down side. When it arrived it was as if I was sent out a returned Item as one of the locking lugs was missing and the Stand was a bit twisted, also when tightening the frame to the base it seemed to go on for ever and did not tighten all the way so it was lose,
I sent this item back to Amazon, No Quibble whatsoever, I think i was one of the unlucky ones and had a bad item,
This does not reflect on Turtle Beach Products as I have 4 of TB headsets including 2 pairs of X12 And 2 Pairs of PX22 Headsets which work perfect, Unfortunately this must of been a friday mic where staff wanted to go home early,,
Leer más
A una persona le resultó útil
Informar de un abuso
Traducir opinión al idioma Español