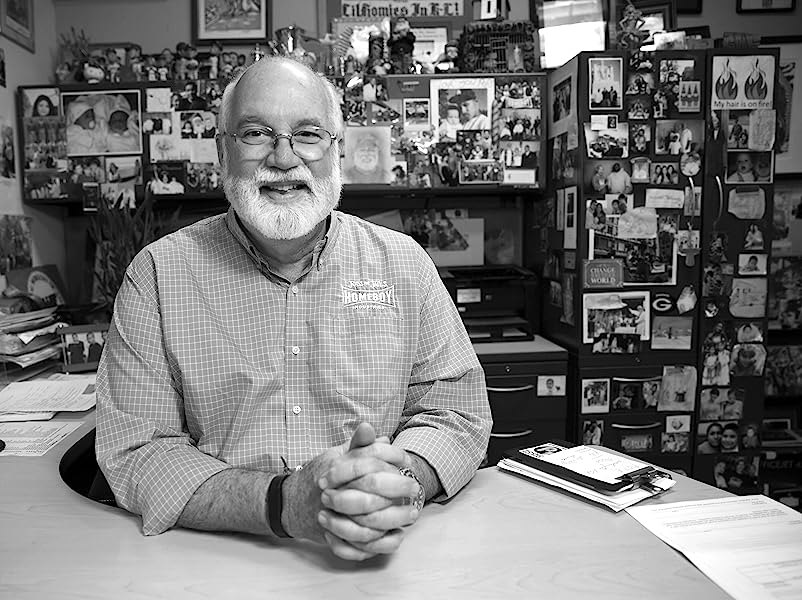 Tattoos on the Heart: The Power of Boundless Compassion (Inglés) Pasta blanda – 22 febrero 2011

"Destined to become a classic of both urban reportage and contemporary spirituality."

"Destined to become a classic of both urban reportage and contemporary spirituality."

"A spiritual masterpiece touching the innermost sanctum of the human soul. Boyle approaches each person as a child of God and fully deserving of love and compassion. His capacity to reach the heart of the most hardened, and to see the best in everyone, inspires. I laughed, wept, and underlined on virtually every page."

--KERRY KENNEDY, FOUNDER OF THE RFK CENTER FOR JUSTICE AND HUMAN RIGHTS

"An astonishing book . . . about suffering and dignity, death and resurrection, one of my favorite books in years. It is lovely and tough and tender beyond my ability to describe and left me in tears of both sorrow and laughter."--ANNE LAMOTT, AUTHOR OF GRACE (EVENTUALLY)

"An extraordinary reflection of a life totally committed to reshaping and redirecting the lives of countless young gang members (from L.A.'s gang culture), Greg Boyle's Tattoos on the Heart proves one man with courage is a majority." --MARTIN SHEEN

"Father Boyle reminds us all that every single child and youth is a part of God's 'jurisdiction'--and when they know that we are seeing them as God does, they are capable of great things. Father Boyle is a national treasure."

"One of the bravest, most humane, heartbreaking, brilliant, and hopeful stories I've read in ages. Father Greg, the Gandhi of the Gangs, fills Tattoos with unquenchable soul force and down-to-earth love." --JACK KORNFIELD, AUTHOR OF A PATH WITH HEART

"Sometimes we are allowed to see in our own lifetimes what we were supposed to see in the life and ministry of Jesus. Read, and let your life be changed!"

"Tattoos on the Heart is an honest, raw, and compelling collection from Father Greg Boyle's life and work with gang-involved youth. His commitment should teach us all a lesson in compromise, sharing, learning, loving, and, most important, living life to the fullest." --ANJELICA HUSTON

“Destined to become a classic of both urban reportage and contemporary spirituality.”

"Incandescent, always hope-filled and often hilarious. Boyle somehow maintains an exuberant voice that celebrates the strength, compassion and humanity of people often demonized. He simply highlights charity and goodness wherever they are found. Boyle intersperses his narratives about gang members and his work with them with theological and spiritual reflections from a variety of theologians, poets and other writers. By introducing book-buying, highly educated readers to people we may never otherwise encounter, Boyle aspires to "broaden the parameters of our kinship.'"--"The Christian Century"

Gregory Boyle is an American Jesuit priest and the founder of Homeboy Industries in Los Angeles, the largest gang-intervention, rehabilitation, and re-entry program in the world. He has received the California Peace Prize and been inducted into the California Hall of Fame. In 2014, the White House named Boyle a Champion of Change. He received the University of Notre Dame's 2017 Laetare Medal, the oldest honor given to American Catholics. He is the acclaimed author of Tattoos on the Heart and Barking to the Choir. The Whole Language is his third book, and he will be donating all net proceeds to Homeboy Industries.

Anne Oliver
5.0 de 5 estrellas A book so good even this minamilist is keeping it !
Revisado en el Reino Unido el 28 de junio de 2018
Compra verificada
If I picked any religion it would be Buddhism ,so I'm far from a fan of religious books .BUT ...this book isn't ramming God, the church or any religion down your throat, infact it references all kinds of people . It's sort of more one mans philosophy, in that it's how he interprets his job, beliefs ,concepts like compassion and how they translate into the life around him. I saw the documentary a few years ago and liked him, I found him not just an inspiration but a breath of fresh air. He has a genuiness that makes him so real unlike characters like mother Teresa . I did however cry many times, and laugh , and smile and just love the way it read. It's lots of short stories and incidents so really easy to pick up and put down. When it ended I felt pretty sad, like he was a good friend who I would miss gabbing to. I've bought it for several people I know, I plan to re read it in the winter as I might remember more of the stories if I do ! But my overall best thing was it didn't preach, leave me feeling drained or wrung out. Instead I feel lifted, my hearts fuller, I'm still laughing about some stuff and somehow Greg is now in my head when I'm faced with crazy situations at work...not in a jimmney cricket way, in a smiling ...' how would he handle this ? ' Ill always think about the 'smelly feet ' story and change my view on lots of things. ! I'm glad he's sharing himself with the world , the world needs him and more like him. An inspiration to us all.
Leer más
A 8 personas les resultó útil
Informar de un abuso
Traducir opinión al idioma Español

Jonathan Green
5.0 de 5 estrellas A real inspiration, a real eye opener, a really good read!
Revisado en el Reino Unido el 25 de diciembre de 2016
Compra verificada
Wow, just wow! Tattoos on the Heart is a brilliant book that shares story after story of the life of a Jesuit Priest who spent the majority of his adult life working with gangs in the gang capital of L.A.

The author has the ability to plant little truth bombs that explode in your heart and mind and cause you to see people and situations in a different light. The story is also a real inspiration for anyone who wants to do something daring but feels discouraged. This is a story of faith and little steps that amount over 20 years to a miraculous ministry. Thousands of lives have been impacted, yet you get the sense that Gregory Boyle just turned up day in day out and related to the people who came across his path.

I don't want to spoil the book for you, but do yourself a favour and read it. I love too how all the proceeds from the book are going to Homeboy Industries - one of the great stories that runs through most of the pages. A real inspiration, a real eye opener, a really good read!
Leer más
A 5 personas les resultó útil
Informar de un abuso
Traducir opinión al idioma Español

S. Perry
5.0 de 5 estrellas Honest not schmaltzy
Revisado en el Reino Unido el 23 de diciembre de 2011
Compra verificada
I bought this as I'm researching gang life and rehabilitation. On receiving the book, I realised that Boyle was a minister and American, I had a sinking feeling that it would be like a lot of terribly written, preachy Christian books.

How wrong I was, Boyle is so honest and humble with compassion that frankly would probably put most Christians, nay Jesus to shame. I think I cried through 95% of the book, precisely because he didn't ham up the tragic stories that fill the pages. I think his amazing honesty also comes from the gangs he works with, which is what makes it a beautiful rollercoaster of emotions. As a non-christian/religious person, I didn't find his references to the teachings of Jesus tiresome, in fact they were reflective and thought provoking. Moreover, Boyle seemed as likely to uses the words of Emily Dickinson, William Blake and Buddha as he is the bible.

Kudos to Boyle, Homeboy Industries, his belief in people that lets them believe in themselves, and the recurring idea of standing next to the people we demonize. This is a guy who practices what he preaches (and still thinks he doesn't do enough). What a story.
Leer más
A 17 personas les resultó útil
Informar de un abuso
Traducir opinión al idioma Español

Policywonk
5.0 de 5 estrellas Well worth a read- excellent, moving story
Revisado en el Reino Unido el 28 de agosto de 2020
Compra verificada
If you arent sure about the challenges that other lives face, wonder whether your life is too staid - read this. It is funny, honest, factual and revealing. It brings into the open the struggles that human lives face, the mistakes they can make so easily and what they can achieve when given the right help. The rest of the books in this series are just as funny and gripping.
Leer más
Informar de un abuso
Traducir opinión al idioma Español