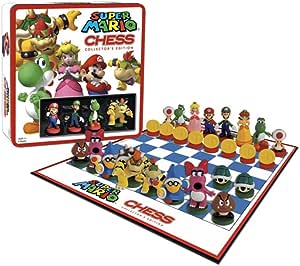 Descripción del producto Super Mario Collector 's Edition – Juego de ajedrez From the Manufacturer It's a battle for the mushroom kingdom. Mario and bowser are battling it out once again. This time in the classic strategy game of chess. Chess, super mario. Pick your team and take control of 32 hand-painted playing pieces. This one of a kind game is as much fun to play as it is to display.

The Steel Remains
5.0 de 5 estrellas Lots of fun and easier to play that you might think.
Revisado en el Reino Unido el 28 de diciembre de 2016
Compra verificada
7 year old son is Mario mad and when he saw this he just wanted it. I tried to put him off but 6 months later it was on the Christmas list. My kids like chess and they like Mario so I went with it.

Actually, it's great! The pieces say on the back what they are (rook, pawn, king etc) and after 10 minutes you get to know them. Only once did I get a piece taken by a bishop that I thought was a knight!

It has got the kids excited by playing chess and the pieces are well made. The board is a fold up thing and is a bit cheap but its ok. Is it worth the money? Maybe not but compared to so much other plastic tat the kids have this has real longevity so I am happy I got it.

Hiro
5.0 de 5 estrellas Does Exactly What It Says On The Tin!
Revisado en el Reino Unido el 17 de abril de 2016
Compra verificada
I was looking for a practical, presentable and affordable chess set that would appeal to both myself and kids, namely my niece and nephew. I do play chess a lot, but I'm also a Super Mario fan. I bought this chess set for personal and casual use but with my niece and nephew in mind since they've recently taken an interest in chess. My existing chess set is not really suitable for kids though as it's too large, heavy and expensive. Thankfully, this Super Mario-themed chess set is free of such inconveniences, and because it features iconic characters as opposed to generic shapes for pieces, it holds my niece and nephew's interest much longer than a classic chess set ever could.

The tin box that holds the chess board and pieces is a real delight for collectors such as myself, and the inclusion of a "window" in which you can see the main characters is a nice touch. I do have one minor complaint though: The pieces themselves are packed in two flimsy, yet bizarrely stubborn plastic containers and both containers include hollows in which the pieces sit rather snugly--in fact, too snugly... Supposedly those hollows are designed to keep the pieces from coming loose while the chess set is displayed upright in the tin box; however, they fit so tightly that removing or replacing them feels like something of an endurance test. I mean, when it comes to unpacking a (seemingly) portable chess set, I don't expect to spend several minutes (yes, literally minutes) removing pieces from two finicky containers in order to set them up on a board. At least they are somewhat easier to replace, but not by much and overall I'm left with the feeling that this chess set is less travel-friendly than it looks. It's kind of annoying that just to transport the thing to some place or legitimately display it inside the tin box I have to initially get into a scrap with the packaging. To be honest, it's such a hassle that when it comes to short-distance travelling, I'd rather simply ditch those plastic containers, put the pieces directly in the tin box and hold it flat during the journey.

The pieces themselves though do feel very solid and are quite tough. Unlike the typical quality of wooden pieces from cheaper chess sets, these pieces have some weight and don't threaten to topple over if you so much as look at them thanks to their wide bases. On the collector enthusiast side of things, the pieces are pleasingly faithful to the characters they represent too. I critically examined each piece in detail and was pleased to see that even the most intricate of character details had been faithfully reproduced such as earrings, broaches, spikes, eyelashes and fingers.

The chess board is perhaps the only weak link in an otherwise well designed product. It is of a decent size and rigid enough; but being made of card rather than wood, I do worry that it might get micro-dented by heavily dragged pieces--not that it has yet. Still, as a precaution, I'd feel inclined to urge young kids to not drag pieces but rather, lift and drop them on the board (as one should anyway) since I want this chess set to look good for display too.

Pros:
> Authentically accurate and durable pieces
> Box design and presentation
> Great for display out of the box

Michael Gold
5.0 de 5 estrellas if you want your kids to stare at their screens less, this is a good start!! A ++
Revisado en el Reino Unido el 4 de diciembre de 2016
Compra verificada
My kids (and their friends) play none stop with tech and their game consoles.

So this was an attempt to get them back playing more traditionally without staring at screens all the time.

And it seems to have worked.

Babs
5.0 de 5 estrellas Mario chess
Revisado en el Reino Unido el 29 de septiembre de 2019
Compra verificada
This item is brilliant for any Mario fan. I'm happy with the price I paid and I like how soon it was delivered after I ordered it. It was well protected during transit and therefore I received it in good condition. I'm well pleased as I ordered it as a gift, I know the recipient will be well happy.
Leer más
Me gusta
Enviando comentario...
Gracias por su comentario.
Lo sentimos, no hemos podido registrar tu voto. Vuelva a intentarlo
Informar de un abuso
Traducir opinión al idioma Español

dons
3.0 de 5 estrellas Broken pieces
Revisado en el Reino Unido el 4 de diciembre de 2019
Compra verificada
It looked good but when I opened it two of the pieces were broken. I didn't have enough time to send it back so I glued them but it's not ideal as it was quiet expensive for a plastic chess set with a v. Basic cardboard board.
Leer más
A una persona le resultó útil
Me gusta
Enviando comentario...
Gracias por su comentario.
Lo sentimos, no hemos podido registrar tu voto. Vuelva a intentarlo
Informar de un abuso
Traducir opinión al idioma Español
Cargar más opiniones internacionales

Adam Smith
5.0 de 5 estrellas Super Mario, Super Chess
Revisado en el Reino Unido el 13 de mayo de 2014
Compra verificada
Bought this for my brother as a Christmas present and he loves it. All the pieces are well made as well as the board to play it on. Even the box it comes in is of high quality. The only little negatives are the fact that Luigi is the queen instead of Princess Peach and would have been nice for a bit of variety to the pawn pieces. Other than that this is a brilliant chess set. Any fans of the Super Mario series would love it.
Leer más
A 2 personas les resultó útil
Me gusta
Enviando comentario...
Gracias por su comentario.
Lo sentimos, no hemos podido registrar tu voto. Vuelva a intentarlo
Informar de un abuso
Traducir opinión al idioma Español

Mr C Fearn
4.0 de 5 estrellas My 7 year old grandson loved this.
Revisado en el Reino Unido el 7 de enero de 2013
Compra verificada
My grandson is into Mario brothers and is just learning to play chess, so he absolutely loved this chess set.
It is well made and the figures are very solid and durable. My only quibble and the reason why it didn't get the fifth star is that the pieces are a little too big for the board and can make the game play a bit awkward. However, that's just me; my grandson loves the set any way.
Leer más
A 9 personas les resultó útil
Me gusta
Enviando comentario...
Gracias por su comentario.
Lo sentimos, no hemos podido registrar tu voto. Vuelva a intentarlo
Informar de un abuso
Traducir opinión al idioma Español