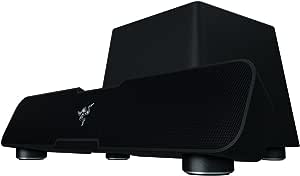 Estilo:Sound Bar The Razer Leviathan’s 5.1 surround sound mode is ideal for gaming and movies. It also features a wireless music streaming mode via Bluetooth 4.0 for seamless music listening. The Razer Leviathan is able to deliver deep, powerful bass tones through a dedicated subwoofer, distinguishing it from other sound bars in its range that cannot produce lower frequencies as accurately. Full range drivers: 2 x 2.5 inches/63.5mm

One Sound Bar to Rule Them All

Yawhann
4.0 de 5 estrellas A sound bar worth having for PC, but not for console or TV.
Revisado en Canadá el 8 de octubre de 2017
Estilo: Barra de sonidoCompra verificada
I needed to reduce my sound system footprint because:

- my bedroom was feeling quite cramped with two JVC standing bookshelf speakers, an 8" active subwoofer, and a Sony 5.1 amp
- the aforementioned Sony amp was starting to produce some nasty cracks and pops out of my speakers when active
- alien voices in my head have been whispering to me for months to either kill the Queen of England or buy a soundbar system (preferably with a subwoofer)

So naturally, I did some research and it came down to the Creative Labs SoundBlasterX Katana or the Razer Leviathan. Unfortunately, it was difficult to find the Katana for the actual MSRP on Amazon.ca, so I opted for the Leviathan since I wanted to bundle all my purchases together on one retailer, plus I wanted to take advantage of Amazon Prime.

The alien voices said to do whatever felt right (of course, I had to run what they said through Google Translate because they said they were practicing their Spanish and wanted to go full immersion).

These speakers sound amazing, even at low or high volumes. I love the dual tweeters and full range drivers, which brings out details I could never get from my bookshelf speakers, which says a lot given the size comparison.

The subwoofer, while stylish, was a bit of a downgrade from my 8" active powered subwoofer, but it still packs a mean punch when it needs to, and I certainly never forget it's there. Now that I'm older, I no longer have a need for big and bulky subs that take up as much floor space as a recliner, so it's an acceptable compromise for me.

The alien voice gave it three glorznaps up.

I don't like that the active source indicator shuts off, leaving only the power button LED lit. Also, there's no volume level indicator either, although I do like the Dolby button + Volume key shortcuts to control the subwoofer level separately. Unfortunately, the buttons are flat and seamless, which makes it hard to tell which buttons I'm pressing - I wish they were more tactile and had clear separation between buttons.

I would have preferred the front display of the Katana to display the current source. NFC + Bluetooth works as expected, and after having a cheap Bluetooth adapter for my amp before, it feels like I'm finally in the 21st century when it comes to streaming audio from my phone in my room.

'It's about froxgar time.' The alien voice in my head agreed emphatically.

I tested out both stereo and surround features. Like I've experienced in the past, surround sound on any single physical speaker housing like a soundbar or headphones gives off way too much echo to simulate a wider sound stage. It ends up sounding unrealistic to me, so I usually stick with stereo profiles, which sound way better to me.

If I want true surround sound, I always default to five actual speakers to give me 5.1 surround as a minimum. Given that, I could never let this act as a substitute for movies on my TV or couch gaming on a console.

Although it doesn't have RGB lighting like the Katana, I don't see it as a detriment since I already have more than enough RGB LEDs on my desk from my PC, keyboard, and mouse. The speakers always stay on and I don't see myself needing to see where the soundbar is so I can reach for it.

As a general rule of thumb, I usually set a maximum volume on the speaker itself and then control the desired volume from Windows.

I heard there were issues with the soundbar going to sleep after 20 minutes, but it looks like this has now been fixed by firmware out of the box.

Pros:
- compact and stylish design with minimalist branding of the Razer logo on the front of the soundbar and top of the subwoofer
- sounds great at high and low volumes
- subwoofer may be small but packs a punch in a small to medium sized room
- NFC and Bluetooth work great and connect without issues
- no distracting RGB LEDs for a device that should be heard and not seen
- alien voice in my head gave its approval
- no need to kill Queen Elizabeth II

Cons:
- LED indicators turn off, making it hard to discern which source is currently selected
- no volume level indicators
- virtual surround sound is a useless feature that should just go away already
- cannot replace a true 5.1 speaker setup
- not suitable or powerful enough for TV or console gaming in a large room
- not satisfying for people who want to kill Queen Elizabeth II

On a slightly unrelated note, I wish the alien voice in my head would stop requesting me to play ESP by The Bee Gees on this soundbar.
Leer más
A 13 personas les resultó útil
Informar de un abuso
Traducir opinión al idioma Español

Jet Black
5.0 de 5 estrellas Explosive Sound System; with minor flaws.
Revisado en Canadá el 17 de enero de 2020
Estilo: Barra de sonidoCompra verificada
This soundbar is in one word, powerful.
As a fan of heavy bass music, edm & heavy metal; it does justice.
Pros - loud, sleek, made for a gaming set-up. (Has a slit at the bottom for cords for mouse & keyboard.)
Can be connected via optic, bluetooth, aux.
Cons - Its expensive, it does not come with a remote,& the customization that is well reknown with razer is not exactly there for this product. I would love to see this updated and available for sync with synapse.

5.0 de 5 estrellas Explosive Sound System; with minor flaws.
Revisado en Canadá el 17 de enero de 2020
This soundbar is in one word, powerful.
As a fan of heavy bass music, edm & heavy metal; it does justice.
Pros - loud, sleek, made for a gaming set-up. (Has a slit at the bottom for cords for mouse & keyboard.)
Can be connected via optic, bluetooth, aux.
Cons - Its expensive, it does not come with a remote,& the customization that is well reknown with razer is not exactly there for this product. I would love to see this updated and available for sync with synapse.

When it is working, the sound is excellent for games and music. The above issues still make me regret the purchase.
Leer más
A 3 personas les resultó útil
Informar de un abuso
Traducir opinión al idioma Español

Pheonix
5.0 de 5 estrellas Hot damn
Revisado en Canadá el 8 de marzo de 2019
Estilo: Barra de sonidoCompra verificada
I dont think theres a single drawback. The sound is rich and filling, it has deep bass if you want it and easy to lower it on the bar itself. it has quite a nice range of sound and options i like having it i got the optical for my xbox 1 x and aux for my pc and my phone for blu tooth. With the tap of a button i can do all 3 fast and easy im impressed cause i had the logitech light sync and all i could hear is boom boom boom and it was disturbing my family so i gladly switched to this system
Leer más
Informar de un abuso
Traducir opinión al idioma Español