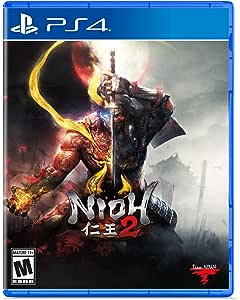 Master the lethal art of the samurai in this brutal masocore action role-playing game… for death is coming.

Journey to 1555 feudal Japan, a country gripped in the misery and madness of endless warfare.

A place where monsters and evil spirits infest a land of natural beauty and menacing peril, where everyone from the smallest child to the bravest warrior lives in constant fear of the spiritual beings known as yokai

Play as a mute rogue living as a hired mercenary and renowned yokai hunter. Born to and abandoned by human and yokai parents, you are burdened with the ability to take on supernatural yokai form.

Can you survive the treacherous Sengoku era and terrifying Dark Realm?

Cherie Pettit
5.0 de 5 estrellas Excellent souls-like, perhaps the best one yet
Reseñado en los Estados Unidos el 17 de marzo de 2020
Edición: StandardCompra verificada
There is a famous movie quote that sticks out to me as I play. From Batman Begins: "A Ninja understands that invisibility is largely a matter of patience and agility.. Always mind your surroundings."

Nioh 2 isn't about stealth(it isn't really much of a thing in Nioh, actually, perhaps outside of sniping) but it is about patience and agility(your controlling), and minding your surroundings. It is about being patient until an opening presents itself and then having the confidence to strike and retreat before you are devoured by whatever horrible yokai you are currently fighting. The genre, whether you call it "Souls-like" or "Soulsborne" or "Masocore" is defined by its difficulty. You go from shrine to shrine which refill your life and respawn most enemies in a level. If you've played Nioh 1, you know what to expect. There is no broad interconnected overworld in Nioh 1 or 2, but the individual stages are packed with personality and challenge. They feel bigger than the first game in every way, and so does their challenge.

I've seen professional reviewers and users comment that Nioh 2 is both more and less difficult than its predecessor. I think that will vary based on your experience with Nioh 1. It certainly builds out from Nioh 1's base by adding more weapons and some interested enemy skill abilities(think E Skill material in FFVII, and just as useful) but at the end of the day you will still be spearfalling to pancake human enemies and it is very similar to the first game. It is the enemies, the yokai realm, and the ki-break systems that have evolved the game into something fresh.

There are tons of enemies, and Nioh 1 already had many. Most of those are back, along with many new ones. I hoped to "learn" all the enemies, but I felt like I never ran out of new ones to have to learn afresh. The enemy variety is crazy. Bosses are seemingly endless and nearly unbeatable(at first). Only by failure and retry will you succeed in most cases.

Ki-pulse makes a comeback. Everything from Nioh 1 has been improved upon. The strength of Nioh 2 is its gameplay. It is like one of the most intricate fighting games ever made baked into a souls like 3rd person action game. You can tell balance with the bosses and each enemy was carefully done. The game is very well made, despite being similar to the first game.

The final thing I want to mention are loading times. I'm on PS4 Pro using an internal SSD, and loads from death are very fast. The overhead for informing me that I actually died, takes up more time than the almost instant loading. Several other games of this type commit the sin of making me spend a long time between death and retry. Nioh 2 is not one of them. Shrine placement and load speed seem to be the best ever for this type of game. The difficulty rather is found in the boss and enemy mechanics.

BWhit
3.0 de 5 estrellas Buyer Beware
Reseñado en los Estados Unidos el 29 de abril de 2020
Edición: StandardCompra verificada
This game is quite difficult. If you are a casual gamer, you will not like this game. It's more difficult than Dark Souls, Bloodborne and Sekiro, but not because the developer made an amazing game...it's very, very "cheap". This game was designed to make you die over and over again by very cheap and often unfair tactics. ALL enemies in this game hit very hard, and it really doesn't matter how much you upgrade or how far you get in the game, you will always be vulnerable to one-hit kills. The developers make life difficult for the player in so many ways, that it feels intentionally obnoxious. Too many things to list here, but this game design is simply lazy and amateur.

Graphics are really quite bad for a modern game. Parts of it look like PS3 graphics, which the occasional attractive scene or area. With the exception of a few maps, most areas are unimaginative, and just made up of narrow passageways. There are a ton of jump scares/attacks that do massive damage on your character. Enemies will mostly tank through your attacks as if you're just tickling them. Here's the thing..the programmers designed this game so that the enemy always knows when you are pushing your attack button, therefore, they swing instantly and hit your character even before your weapon makes contact. We tested this hundreds of time. The problem is that so many enemies will severely stun you or kill you with this tactic. Most enemies can block every hit you throw at them, but your character can't do the same. You will have to choose between wearing light armor and being under-protected, or choosing heavy armor and having no stamina. Stamina is a HUGE problem in this game. In fact, it will drain from one or two swipes, from running, from stepping in the constant Ki pools that are dropped by enemies. There is very little room for aggressive gameplay.

Bosses are mostly horrible. Many casual gamers will not get past the first boss. I'm currently almost at the end of the game and after many boss fights, I can say that they are virtually all cheap and unfair. Your stamina will magically drain for no reasons in these boss fights. We tested this too. This means that you will often stand there and not even be able to move or swing your weapon during times when you're doing nothing, or standing in Ki pools. I really believe the developers programmed in some nonsense to make this game seem difficult. Hit boxes are ridiculous, damage numbers are all over the place, and bosses will constantly spam you with seven or eight hits at a time that leave you completely frozen.

The reason I'm giving this game three stars, is that there ARE some enjoyable moments and maps in this game. I believe that they occasionally felt proud of what they were creating, but often resorted to cheap tactics in order to get a reputation for creating difficult games, but failed at making a quality experience. This sequel does not improve on anything from Nioh 1 (which was more enjoyable) but rather looks like a DLC of that game and makes it way more difficult. Many people will love this game, but know that you'll constantly feel cheated.
Leer más
A 24 personas les resultó útil
Informar de un abuso
Traducir opinión al idioma Español

Juju
5.0 de 5 estrellas A huge improvement from the first Nioh
Reseñado en los Estados Unidos el 16 de marzo de 2020
Edición: StandardCompra verificada
Firstly this game addresses a lot of issues I had from the first game which makes it a lot more enjoyable. Some like adding optional tools for those who find the game lonely and want a partner even if it comes at a sacrifice of making Revenant (red sword challenged) battles extremely easy which are also optional. The game's atmosphere feels more interesting and I actually find myself more interested in the characters this time around. Some of my favourite changes where;

-Character creation which explains itself but its a wonderful addition specially when Nioh's main character never truly expressed much feelings so never truly cared about him.

There were some changes I find to be nuisance like more skills on top of the already very deep combat system. I still don't use the yokai skills as they feel clunky and seem to get killed more than anything. The yokai shift is more of a clutch that can get you killed if you dont pay close attention. Overall I found them interesting but for me I didnt see much use for them except for clutch situations. Same with the AI aid that could easily lure more enemies thus meeting your death. MY biggest issues with Nioh 2 are really more of the same with the first game that overtime it just doesnt hold up very well but it doesnt mean its bad. However, the grinding portion was made fairly easier without it being a hassle like the first game

Overall I find the game more of a HUGE improvement from the first one without making it too easy nor unfair and cheap. There is some moments when it could feel like that but so far its very rare. I usually dont ever do reviews because I am bad at it but I really believe this game is definitely worth your time. It doesnt try to be something its not and doesnt exactly feel like Nioh 1.5. Its feels like a true sequel and a very good one and I really recommend.
Leer más
A 24 personas les resultó útil
Informar de un abuso
Traducir opinión al idioma Español