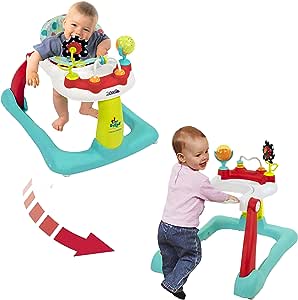 The walker features a variety of brightly colored, developmental toys and activities that will keep your baby entertained while stimulating their mind.

The plush foam seat can be adjusted for growing babies and the walker easily transitions from a seated activity walker to a walk-behind walker as your baby continues to grow. This 2-in-1 has independent front swivel wheels for easy maneuverability, and non-skid friction pads to allow for easy stops.

Your little one will be taking their first tiny steps with ease with our Tiny Steps 2-in-1 Activity Walker!

The plush foam seat can be adjusted for growing babies and the walker easily transitions from a seated activity walker to a walk-behind walker as your baby continues to grow!

Prometheus Worley
5.0 de 5 estrellas Ready-Set-Go!!!!..Wonderful Little Walker
Reseñado en los Estados Unidos el 12 de enero de 2017
Compra verificada
What can I say...we love this walker!!! Our little one took to it like a fish in water, he simply adores it. The mobility the walker has afforded him is priceless (on hard wood flooring). At 4-5 months he was already trying to crawl and stand so we knew we had to start contemplating finding a decent walker for him. After searching the internet for what seemed like months, looking for the "best /safest" walker we could find within our price range, we finally settled on purchasing the Kolcraft 2-in-1. When we first got it, trying to adjust the seating properly for him seemed a bit challenging until we figured out how to adjust the strap (located underneath the back /bottom of the seat). Once we got it right, it was off to the races for him...:-)

Our little Mastro zooms so fast around the rooms /areas we make space for him, that we literally have to keep a watchful eye on him. He's like a little speed buggy as soon as we put him in it and his feet touch the ground. Overall we're very satisfied with or decision to purchase this particular walker.

Pros:
-It has an "open" rear base (to prevent baby's feet from continuously hitting walker bottom)
-It's light weight
-Easy to clean
-Easy to set up
-Affordable & Sturdy
-Has fun toys on it and a post to attach other baby toys.
-Transitions into a frontal "push" style walker as baby gets older.
-Seems to keep baby happy and active.

Cons:
-Walker doesn't seem to be as mobile and free-flowing on carpeted surfaces.

[Note]: If you do have hardwood floors I'd highly recommend considering /purchasing toddler non-skid "Grip Socks". They really made a difference in helping our little one move effortlessly across the floor.

Gene B
1.0 de 5 estrellas Not for big babies!
Reseñado en los Estados Unidos el 14 de febrero de 2018
Compra verificada
Womp, womp! Bought this based on the reviews but unfortunately, we didn’t like it as much as others. If you have a small baby, this might work out ok. But if you have a chunky baby with thick legs especially, this will NOT work out. My baby was about 20 ish lbs and 9 months old when we tried this walker and from day one, she’d literally get stuck in it to the point we had to stand on the base and gently pull and tug to get her out. The leg holes left red marks on her legs so after only a few runs across the floor over a couple days, we discontinued use. Another flaw in our opinion is the play piece that goes on the front. The plastic washer piece that goes underneath kept loosening up during play and they’d fall off onto the floor and then our daughter would yank the entire toy piece off (we have a strong baby BUT she’s STILL just a baby - it should hold up!). Lastly, we thought we’d just use it as the stand and walk function. But, now at just shy of 1 year old and standing on her own and cruising like a pro, this feature isn’t working for us either. She stands up, grabs it, but as soon as she starts walking it pushes from under her so she’s constantly falling and getting back up just to go a couple steps and repeat. I REALLY wanted to like this bc it got great reviews but our experience with it was bad so we’re just donating the thing to a church. I’ve also attached a pic of our baby in her car seat to give you an idea of her size. Wish there was a zero star option ...
Leer más

Mirdeli
5.0 de 5 estrellas SUCH A GREAT PURCHASE!!
Reseñado en los Estados Unidos el 6 de octubre de 2016
Compra verificada
This is such a great piece. Very Sturdy and yet super easy to fold up and out of the way. I bought it for my 3 month old, because he really wants to be up and looking around but I can't hold him all of the time. The cushioning around the seat is great to help him. When I set it up, I didn't attach the wheels yet so it doesn't move, as I want him to just sit/stand in it for now anyway. The quality is really great, and the colors are much better than a lot of other toys in this category. I have three older kids, and have used other products in the past but am so glad I came across this one. The size is great for our apartment lifestyle, and I see us using this for months to come. I love that there is a little tray, and we have attached a couple of toys onto the slider bar on there to give him a little something closer to touch for now.
Leer más

DIY
1.0 de 5 estrellas Update to: Front wheels are horrible, don't turn or spin
Reseñado en los Estados Unidos el 13 de junio de 2019
Compra verificada
After further use, it became obvious why the original wheels did not work well. Seems that the wheels that were originally shipped with this were mirror images of each other, instead of identical wheels (see the photos), so they were always opposing each other when our kids tried to turn. Customer service shipped a new set of wheels that are both angled the same way, so now they break the same way when the kids try to make a turn, instead of fighting against each other (hence the scraping). One wheel would turn, while the other would just drag along. Now, both of them turn the same angle at all times, and work better. The wheels are much lower quality than the old one we have from 6 years ago, but at least they work properly now.

See my original review below:

We bought this because we have twins and we were given one of these that is 6 years old. Same company, same product. We bought another because the one we were given works so well. Unfortunately, the older one that we have works much better than this one. The main issue is the swiveling, caster front wheels. The old one has much more robust wheels, and those wheels are much better quality. The old one rolls easily on our hardwood floors, while the new one, the front wheels don't rotate with the direction of travel, like you expect caster wheels to do. They are also not perfectly round, so combined with the wheels not turning in the travel direction, they tend to just drag across the floor instead of rolling, big scraping noise the entire time our kids use it. You can see the frustration in them, as they can't go in the direction they want to go because the wheels won't turn. Whatever twin is in the new one just tends to give up after a little while and watches the other twin running all around in the old one while they just sit there and watch.

The new wheels are a hard plastic, not round, seem to have a different caster angle, not as heavy-duty, have smaller diameter hardware for the axles and mounting pin, and thus don't steer or spin as easy as the old ones. Just scrape across the floor instead of rolling in the direction of travel. Obvious differences can be seen in the photo.
Leer más