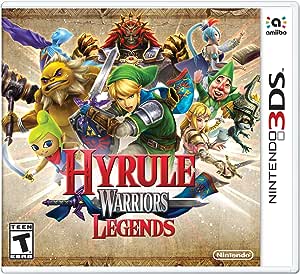 The power to save Hyrule is in the palm of your hand!

Cut down entire legions of enemies as fan-favorite Legend of Zelda characters using powerful moves as Hyrule Warriors comes to the Nintendo 3DS system. Control multiple characters to enhance your strategies and enjoy new story elements with playable characters from The Legend of Zelda: The Wind Waker, such as Tetra, King Daphnes, and more.

War rages as the delicate balance of the Triforce is disrupted. The kingdom of Hyrule is once again being torn apart by a dark power, this time lead by Sorceress Cia. Now it’s up to the legendary hero Link to face hordes of enemies and find the missing Princess Zelda. Advance the story to unlock new playable characters, each with unique moves and weapon types. Collect Rupees and other useful items to upgrade weapons and craft badges, which you can use to bolster each warrior’s abilities.

CloudyObsession
4.0 de 5 estrellas Makes for a great portable game, better than the WiiU version (New 3DS recommended), but probably wait for Switch version
Reseñado en los Estados Unidos el 25 de abril de 2018
Plataforma : Nintendo 3DSCompra verificada
Overall a pretty excellent 3DS game. Compared to the original, it's a pretty solid port, if a little inelegant. The menus (and to a lesser degree, the UI) could have used a lot more optimization for the smaller screens and resolution, and the difference between pre-rendered and in-game cutscenes, which sometimes occur side-by-side mid-battle, is incredibly jarring here. That said, the game plays very well on the New 3DS and there are a lot of new tweaks to the gameplay that actually make it a superior experience to playing the game on the WiiU. The graphics quality is obviously a bit reduced from the WiiU version, which is to be expected, but it still looks excellent for a 3DS game. There also generally won't be quite as many enemies on-screen as there were originally, but I never really noticed or found this to be a hindrance. Playing in 3D drops the framerate noticeably, and the imported FMVs from the WiiU version have some layering issues when viewed in 3D, so I don't generally play the game with the 3D on at all (and you can't if you're on an original 3DS, I'll come back to this).

Having played a decent amount of the WiiU version, I much prefer this one. There are a few things missing, like Challenge Mode and the 8-bit weapon tiers, but having all the DLC content from the previous version included as well as a bunch of new stuff more than makes up for it. Personally, I don't miss Challenge Mode too much when Adventure Mode, which I much preferred, is greatly expanded in this version. The "My Fairy" mode feels a bit tacked on, but it doesn't ever get in the way, at least.

ONLY PICK THIS UP IF YOU HAVE A NEW 3DS. Granted, I haven't tried to play it on an original, but all the research I did before picking up this version makes it clear that playing it on an original 3DS is not really worth it. The framerate is consistently much worse, there's even fewer enemies on-screen, the lack of 3D is pretty negligible but everything else on top of that, not worth it. It should be telling that this game's follow-up, Fire Emblem Warriors, the 3DS version won't even play on an original 3DS.

Hyrule Warriors is a really fun game on its own, the fusion of Dynasty Warriors gameplay with a Legend of Zelda theme and setting works very well and for a pretty entertaining hack-n-slash action game. That said, it's far from perfect. The story mode is a little short and doesn't really have much replay value, despite how much the game encourages replaying those maps. The bulk of the game's unlockable content is found outside of the story mode (called Legend Mode, or Free Mode which is unlocked after completing it which allows you to play the missions with any character/characters), in Adventure Mode. Adventure Mode is where I've spent most of my time playing the game, I find it to be a fun way to remix the maps, enemies, characters, bosses, etc. of the story mode with a greater variety of mission types, but it does get very grindy and can be kind of hard to navigate and find everything without using a guide.

The last thing I want to add, while I want to say this is the superior version of the game, the upcoming Switch version will have ALL the content from both this and the original WiiU version, as well as every bit of DLC released ever already included. All the gameplay improvements made in Legends will make it over, the graphics will be even better than the WiiU version, Challenge Mode will be restored, pretty much the only feature in doubt is My Fairy which...can be left out with no real harm or foul, honestly. Plus, it's a Switch game, so it will also be portable.

So if you really want to play Hyrule Warriors and have or will be getting a Switch in the future, pass this one up and wait until it's out on Switch.

But, if you're looking for another fun game for your 3DS, or still want the best version of this game and aren't planning to own a Switch, grab this one!
Leer más
A 5 personas les resultó útil
Informar de un abuso
Traducir opinión al idioma Español

Kindle jenni
4.0 de 5 estrellas Hyrule Warriors Anywhere?!
Reseñado en los Estados Unidos el 29 de mayo de 2016
Plataforma : Nintendo 3DSCompra verificada
As a big fan of the Wii U version, I found myself never really wanting to sit in my living room to play the game, as I tend to play PC more. This allows me to play on the go or a battle before bed. I've far surpassed my play time on the Wii U and actually find it to not look or perform nearly as bad as I thought it would (New 3DS). I did try this on a 2DS though which was not only a terrible frame rate, but far fewer enemies. Basically, it is essentially a New 3DS exclusive without actually being labeled as such, probably to sell a lot more. So while the game runs flawlessly for me, avoid at all costs unless you have a New 3DS!!!
Leer más
A 13 personas les resultó útil
Informar de un abuso
Traducir opinión al idioma Español

MLM
3.0 de 5 estrellas Fun, but Repetitive.
Reseñado en los Estados Unidos el 31 de marzo de 2016
Plataforma : Nintendo 3DSCompra verificada
So the game is good. The gameplay seemed familiar and when I looked it up, it seems as though the people who make Samurai Warriors helped make this game as well and that explained it. Anyways, like I said it's good... but it's not... great. From what I researched the Wii U version has multiplayer and, for some reason, I believe they've removed that feature from the 3DS version... which is exactly what the game is missing. It's fun, but only for so long because the slash 'em up style of it becomes repetitive relatively quickly, even with a larger repertoire of characters to play as the gameplay is all, essentially, the same. You'll have fun with this one, but if you're like me, despite possible progression, it'll grow old relatively quickly. Again, still not sure why this game doesn't have multiplayer as, for a game like this, it's what adds just enough variability to increase the lifespan and fun of almost any game.
Leer más
A 3 personas les resultó útil
Informar de un abuso
Traducir opinión al idioma Español

john heckman
4.0 de 5 estrellas Dynasty warriors with a Zelda paintjob
Reseñado en los Estados Unidos el 2 de agosto de 2017
Plataforma : Nintendo 3DSCompra verificada
I didn't expect to much Zelda from this game but the story line turned out to be pretty good and they managed to tie in links tools in a neat way. However The core of the game is a hack and slash enemy cluster bomb. So be prepared for that. I haven't dabbled into the fairys to much, and the only gear you get is a weapon. So there isn't really any depth to build making. I feel like they could of compensated for that with a skill tree but every skill is a passive that is always on rather than choosing certain skills that synergize together. All in all I enjoy the game and it's got a lot of replay value. But the customization is shallow. if you could of geared up your hero or class customization was more in depth it would of been a five out of five. One last thing, you need to use all characters and some are less fun than others. And you need to keep all characters leveled in order to not get your skull smashed in.
Leer más
A 2 personas les resultó útil
Informar de un abuso
Traducir opinión al idioma Español

Daniel R. Derrickson
3.0 de 5 estrellas Great, but no going back.
Reseñado en los Estados Unidos el 8 de julio de 2018
Plataforma : Nintendo 3DSCompra verificada
I love the legend of zelda and everything about it! Every game (except of course the atrocious cdi games) have all been gems! However, as fun as this game is, there is no way to delete your saved data. I know this doesn't sound so bad, but if I want to play again from scratch or if I want to reset the progress to sell the game, there is no way I can do this. Aside from that, this game is fun and addicting, as you would hope.
Leer más
A 2 personas les resultó útil
Informar de un abuso
Traducir opinión al idioma Español
Ver todas las opiniones
Envíos GRATIS y rápidos más Prime Video
Con Amazon Prime disfruta de envíos GRATIS y rápidos, video, música y mucho más.
> Empieza hoy
Inicio de página
Conócenos
Gana dinero con nosotros
Podemos ayudarte
Métodos de pago
Y también:
© 1996-2020, Amazon.com, Inc. o afiliados. Todos los derechos reservados.