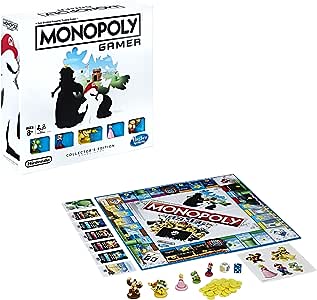 Cral
5.0 de 5 estrellas The best version of monopoly
Revisado en el Reino Unido el 22 de marzo de 2018
Compra verificada
It's loosely based on monopoly, but much more enjoyable. Travel around the board buying property as normal, but use the special dice to activate your characters unique power ups.

Travel around the board collecting coins you've made other players drop, rent from properties, and bonus rolls.

The other major difference is that when you pass go you fight a boss. Players pay to fight the boss, and once beaten you get the special power up on the card.

Once you've beaten the final boss, you total up your coins, points and bosses to find out who wins.

The collectors edition differs as you get a bonus character (bowser), plastic coins instead of the flimsy paper ones in the original, and an alternate bowser junior final boss card.

The box also provides a great storage space for the additional characters available (sold separately - which really add to the game). Also includes a collector's book with artwork and characters information.

Dave
5.0 de 5 estrellas Great
Revisado en el Reino Unido el 22 de abril de 2020
Compra verificada
Fantastic twist on a classic, took a few turns to get the hang of things but we thoroughly enjoyed it once we did. Definitely faster paced than traditional monopoly but thats not a bad thing

Cons - states only 4 players, we had 5 so were struggling with coins etc.

Massive Cons - there are additional characters you can buy separately which i was happy to do. Until realising nowhere in the UK stocks them and eBay prices are pathetic meaning we now have a "collector's edition" that isn't really that special because we cant buy the extra characters
Leer más
Me gusta
Enviando comentario...
Gracias por su comentario.
Lo sentimos, no hemos podido registrar tu voto. Vuelva a intentarlo
Informar de un abuso
Traducir opinión al idioma Español

The difference between the collectors edition and the base version is the collectors includes plastic coins, a translucent blue six sided dice, Bowser is included as a playable character, the final boss is Bowser Jr (Base game is Bowser Sr), the board is blue on the back with the game logo and includes the special collectors artwork on the face of the board, the box contains spaces for the 8 add on characters, which is helpful if you plan on getting those, and finally the manual is a nice rubberized textured paper thing with a place to place the stickers included with each character. This version of the game is English only for those who aren’t sure.

The game itself is fast paced and fun to play, I mostly play the two player version with two game pieces per player, games last about 20-30 mins. I’d say it’s worth splurging for this version of the game over the regular edition, the coins, character slots and higher quality box contents alone make it worth the extra 20 bucks or so. This game will be played a bunch for sure, looking forward to collecting all the bonus characters and is fun for kids and adults (who enjoy Nintendo/Mario)… it’s hard not to have some fun playing Monopoly Gamer!
Leer más
A 3 personas les resultó útil
Me gusta
Enviando comentario...
Gracias por su comentario.
Lo sentimos, no hemos podido registrar tu voto. Vuelva a intentarlo
Informar de un abuso
Traducir opinión al idioma Español
Cargar más opiniones internacionales

The way this game works is similar to the original Monopoly. You roll a dice, you land on properties and buy them, you pay rent, etc etc...

What makes this game unique is that each piece has a unique special ability, like forcing a player to sell a property, or getting a lot more coins from the bank. There's also a second dice that let's you use a special move, like a green shell will hit a person in front of you and make them drop coins on the board to later be picked up by someone walking by, or a red shell can go in either direction.

Passing Go makes a boss appear that players will then pay coins to try and roll above a certain number to defeat the boss and collect the card. The game ends when all the bosses are defeated and victory points are added up!

There are also bonus pieces you can buy which have different abilities like Diddy Kong, Boo, Rosalina, etc... There are 6 in total.

The Alchemist of Wonderland
3.0 de 5 estrellas Okay, but underwhelming
Revisado en Canadá el 29 de diciembre de 2018
Compra verificada
After reading reviews that stated how much better this Collector's Edition was, I decided to spend a little extra and get it.

Firstly, the game itself. It is a decent twist on Monopoly. I like that it is faster paced, and the Nintendo theme is cool. However, it is a very dumbed down version of Monopoly. Event cards are replaced by coin block slots, where you simply get money. Railroads are replaced by green pipes that simply make you move further down the map (you can't purchase those). The parking spot does nothing.

The cool additions are the boss fights (that all feel a bit similar, to be honest - I would have preferred many more bosses, with different effects, but whatever), the 2nd die that gives you an extra action other than just moving, and the Star Power squares, where you can activate your star power.

But still - it felt hastily put together, leaving much potential on the table. Nintendo Event cards would have been great! Or doing something better with the green pipes. Or something different with the parking spot. I don't know, I feel the game lacks soul. It is just decent.

Sure, plastic round coins are better than paper ones. But they don't look that good! All four players were disappointed with them. The board itself doesn't not look good either, as the middle is mostly white. It would have been super cool to have some kind of map or art on it. Or even something 3D.

There are no little houses to put on the properties you own, like in the normal Monopoly. That is so much wasted potential - little colored mushrooms would have been super cool!

The five figures you get feel a little cheap, and the detailing isn't good at all. I know, the game is not THAT expensive, so I shouldn't expect amazing collectible figures - but still, those did not look good.

The box itself is ok. But none of the box, figures, or boards make for particularly nice display pieces. It is simply not impressive. The box contains slots to add extra characters if you find them - but those characters can be expensive to find. I wish there was an expansion pack with all the extra characters.

You get a nice rule book, with a section to put stickers of the characters you own. This version comes with 5 stickers for the 5 characters. That's kind of cool, I guess.

All in all, I had a decent time playing the game - it can be fun. But I'm not sure our group would really want to play it again, now that the novelty wore off, and the game is quite shallow. Also, nothing in the box makes for a particularly good display piece, so I'll probably just store the box on a shelf somewhere.

Conclusion - A big 'meh' from me.
Leer más

Fran
4.0 de 5 estrellas Great Fun with a twist
Revisado en Canadá el 28 de mayo de 2018
Compra verificada
I like the game. Its sort of like monopoly with less properties and more interesting twists. It uses Nintendo characters and coins instead of paper money which I like. At the end its all about who has the most points. I have to say the box for this collectors edition is not desirable- although with kids- it lasted longer than the flat boxes. The edges eventually broke on the box. But overall its a great game!
Leer más
Me gusta
Enviando comentario...
Gracias por su comentario.
Lo sentimos, no hemos podido registrar tu voto. Vuelva a intentarlo
Informar de un abuso
Traducir opinión al idioma Español

Amazon Customer
5.0 de 5 estrellas So fun , so good !
Revisado en Canadá el 28 de marzo de 2019
Compra verificada
What can I say , Best Monopoly I have played it's very fun , you can easily play more than 4 players . The game was so fun that I had to buy other caracthers . Kids love it ! The only bad side is the other caracthers are very expensive ! Especially Rosalina ! The best thing about this game is that it ends after every boss is defeat so there's no long games , longest game was 2 hours but that's because we were playing new rules that we created .
Leer más

David
3.0 de 5 estrellas The board game smells nice like maple.
Revisado en Canadá el 9 de abril de 2019
Compra verificada
What I enjoyed about the board set was it's unique distinct smell of Maple which permeates quite nicely in any room size big or small. The scent is reminiscent of Aunt Jemima's remarkable maple syrup pancakes.
The board game is alot of fun to play with friends, families and Walmart mannequin (I find the Target mannequins not as responsive).

Side note, this board game will not start your car nor turn on your TV. Another con is the missing characters which you have to buy separately at a premium. All and all this game can cost close to 80 dollars if you collect all figures. 80 bucks for a board game is not worth it in my opinion.

The Monopoly money included in the game cannot be used to purchase bananas nor should it be intended to use as salad croutons. The characters and coins are made of a high quality plastic to out last the Earth and will contribute nicely to the destruction of our planet. The papers cards will bend over time and wrinkle much more faster than our elbow skin.

Christianne Doiron
5.0 de 5 estrellas 10 & 12 years old and we LOVE it!
Revisado en Canadá el 4 de enero de 2018
Compra verificada
Forgot to check if there was a 'french' version or not, the game is in English but I played a few times with my two kids, 10 & 12 years old and we LOVE it!! It's the best monopoly version, I found the classic one kind of boring after a while but if you like Mario Bros, you'll certainly love this one!! Can't wait to play again! Great service and delivery was as promised!
Leer más
Me gusta
Enviando comentario...
Gracias por su comentario.
Lo sentimos, no hemos podido registrar tu voto. Vuelva a intentarlo
Informar de un abuso
Traducir opinión al idioma Español

LA
5.0 de 5 estrellas Very satisfied with this product.
Revisado en Canadá el 10 de julio de 2018
Compra verificada
Good quality pieces - this one comes with a Bowser. These coins are plastic so they are difficult to stack on the board (as opposed to the original ones made of paper). The Boss Battles are also slightly different from the original version. Otherwise, very satisfied with this product.
Leer más
Me gusta
Enviando comentario...
Gracias por su comentario.
Lo sentimos, no hemos podido registrar tu voto. Vuelva a intentarlo
Informar de un abuso
Traducir opinión al idioma Español