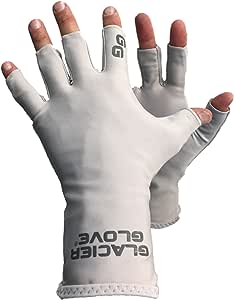 Lunaloba
5.0 de 5 estrellas Great for bike riding!
Reseñado en los Estados Unidos el 8 de julio de 2014
Compra verificada
Great for riding my bike! I live in Los Angeles and commute to work on my bike. My hands were really taking a beating from the sun so I thought I would try these. I have had them for a year now and they work great! They don't get too hot when its 90+ and they come off and on really easily. The open fingers provide a little much needed ventilation in the heat! They are a bit slippy so I can see where some folks have had a problem if gripping a steering wheel, but they are just fine on my rubber handles. I put them in the wash in a lingerie bag (not sure if I'm supposed to) and they mostly come clean but are getting a bit worn so I might get another pair.
Leer más
A una persona le resultó útil
Informar de un abuso
Traducir opinión al idioma Español

Casey
4.0 de 5 estrellas Ecellent ... so far
Reseñado en los Estados Unidos el 11 de agosto de 2011
Compra verificada
I've used a pair of Dr Shade Sunglove for backpacking and hiking about 7 days so far. I can comment about their function but not their durability, which is why I've rated the gloves 4 stars instead of 5. That said, I have no reason yet to question the durability of the gloves.

The Sungoves do an excellent job of protecting my hands from damaging UV rays. When using trekking poles the back of your hand faces the sun more than when your arms hang naturally at your sides. Dr Shade Sungloves let me hike protected, without the use of greasy sunscreen. The semi-slick fabric of the gloves isn't a problem when holding the poles. I backpack with a thin long sleeve shirt and the length of the gloves is very adequate for full sun protection. I paid eleven ninety three with free super saver shipping for a L/XL, not the seventeen seventy four listed today.

Tinker
4.0 de 5 estrellas Don't last/Cheaply made (UPDATED)
Reseñado en los Estados Unidos el 25 de julio de 2013
Compra verificada
I've had these for ten (10) days. I've used them for about 6 hours total, when I'm fishing, because I get sun-poisoning on my hands and forearms very easily. Being a lifeguard has it's downsides...

They are splitting along the side seams of the fingers. And not the fingers that I use most when fishing, but along the middle "saluting" finger. Six hours!?

They do not/did not fit snugly, in fact they were a bit more loose than I would have preferred, but they fit comfortably and I had no complaints, EXCEPT SIX HOURS!?

I don't have fat fingers - I'm told my fingers are slender and long and look like I should be a pianist. I dunno, they look like fingers to me. But they are not abnormal: little children don't cry and grown women don't faint when they see my hands.

Run, don't walk from these. Either they are as poorly stitched as one might possibly imagine, or the Chinese (yes, they're Chinese) quality control is about average for the crap we import...

Cannot recommend, even to someone I don't like. SIX HOURS!? Rats!

I purchased a second pair of the Glacier Glove sun gloves after the first pair failed and fell apart. My preference is for the Columbia brand sun gloves, but, at the time, they were not available.

This second pair by Glacier Glove has lasted for 12 months (the Columbia gloves are still in the drawer).

I have not used them differently than I used the first pair. I have not been more gentle with this pair than I had been with the original pair. They've been wet, they've dried in the sun; they smell like the fish I've picked-up while wearing them. They get abused and ignored and just stuffed somewhere until I need them again, and other than being slightly - very slightly - stained, this pair has held up. Occasionally I need to singe a loosening thread at the seams at the end of the fingers, but they've had no other care or maintenance.

I found the second pair - the pair I am still using - to be slightly more snug than the first pair. I had commented that pair #1 were a more loose fit than I wanted, but this pair fits me properly.

I have no explanation for the differences I've observed between the two pairs of gloves. I have no guess about what changed in the two or three weeks between purchasing pair #1 that failed immediately, and pair #2 that as lasted for a year, but they are completely night-and-day, Jekyll and Hyde.

I've raised the rating to four stars. After the pair I'm using now finally wears out, I won't buy any more of them because of the opposite experiences I've had, but in fairness, one failed miserably and the other is the Eveready bunny.

PurpleDuck
5.0 de 5 estrellas Good gloves
Reseñado en los Estados Unidos el 4 de abril de 2012
Compra verificada
These are very good gloves, I got the small medium and that size is fine. I would say I am of average build, male. They do work very well and are very comfortable. No issues for me with driving they work just fine. I like the fact they are light weight and you can fold them down in your pocket when you do not need to wear them. Can see getting a second pair in the future.
Leer más
A 2 personas les resultó útil
Informar de un abuso
Traducir opinión al idioma Español

Happy Wife
5.0 de 5 estrellas Love them so much, I gave them to my mother for Mothers Day
Reseñado en los Estados Unidos el 9 de mayo de 2011
Compra verificada
Both mom and I are very sensitive, even allergic to the sun. I purchased these and another pair of solar gloves.  Coolibar UPF 50+ Full-Finger Gloves - Sun Protection

After using them both, I love them both. Both pairs are very airy. Both keep my hands from hurting from the sun. An neither lets my hands get hot, they both breath very well. These stretch very nicely and would fit any size hand. The others do not stretch as much but run really large and are rather loose on me - and I have beefy hands for a woman.

My mom has large knuckles from arthritis, and these were so stretchy, I sent them on to her. They are very comfortable and I would just like to use them for driving and don't even take them off when I go in a store. They feel nice on my hands and I know they'll also protect my mom's delicate skin from accidental abrasions as well. I'd like to get another pair for myself.

I like how the steering wheel slides after turns in these gloves, very smoothly as I let the steering wheel go back to it;s position. The Coolibar pair have a hole over the palm, which might be good to keep air in the gloves, but I don't think it's necessary. I use it to pull a finger out to use the touch pad on my smart phone, this pair doesn't need that since the finger tips are not covered.
Leer más
A 44 personas les resultó útil
Informar de un abuso
Traducir opinión al idioma Español
Ver todas las opiniones
Envíos GRATIS y rápidos más Prime Video
Con Amazon Prime disfruta de envíos GRATIS y rápidos, video, música y mucho más.
> Empieza hoy
Inicio de página
Conócenos
Gana dinero con nosotros
Podemos ayudarte
Métodos de pago
Y también:
© 1996-2020, Amazon.com, Inc. o afiliados. Todos los derechos reservados.