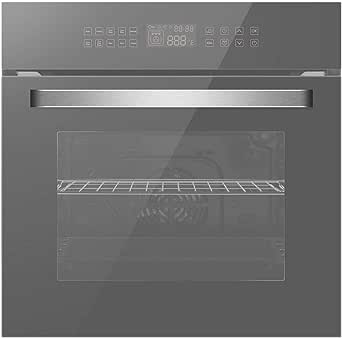 Yoga Addict
4.0 de 5 estrellas Low price, lots of bells and whistles, what's not to like?
Reseñado en los Estados Unidos el 18 de noviembre de 2018
Estilo: 24WOC17.Compra verificada
So far, so good. We haven't cooked anything yet. This review is so that I can detail what the installation and my overall impression of the product is, so far, while it's fresh in my mind. I plan to write a thorough review of it's cooking strengths and weaknesses, if any.

The box appeared OK with just a few small dents, no sounds of broken glass and nothing rattling. Once the box was removed, I noticed two dents, one in the side and a pretty large one on the bottom. As they were cosmetic, I figured we could go ahead with the installation. These appeared to be dents from the factory?! I know, weird, right? The box was pretty heavy duty and there were no real punctures or crushed areas, apart from a small one on the corner, not related to any damage. The side was pressed in and the bottom was misshapen and dented. Not a huge problem, but disappointing.
The interior of the oven and the door were undamaged, so we proceeded to install.

The "Instruction Manual" is a joke and has numerous typos, poor Chinese to English translation, is confusing and lacks a lot of necessary and useful information that one would normally expect=Joke, haha!

This oven is not UL underwritten, so Buyer Beware!

There is no metal junction box with tensioning collar on the oven for the "flex" (the flexible armored cable I cannibalized from my old oven) to be safely connected, according to code. There was a small plastic pseudo junction box (not code), but IMHO (and my electricians') anything hardwired with 220v absolutely should have come with its own metal junction box. I deducted one star for that reason.

No wire nuts were included.

Also, the connecting wire(s) are only puny 16 ga. copper strand, not solid copper 8 ga., like the "Instruction/Joke Book/Manual" warns the user! "WARNING! USE 8 GAUGE SOLID COPPER WIRE". So, why did they go uber cheap and use crap wire? Note: my electrician would not install this appliance because it could not be up to code. So, you might want to think about that before buying. I didn't know about it until I unpacked the whole thing and then it was too late. Why is Amazon even selling this if it can't be up to code?

It is helpful to know that with 220-240v when connecting the black and red on the oven, they are interchangeable. I didn't know that and there wasn't any explanation or detail in the manual for that. After some online searching, I found out that was the case.
Of course, from the house to the flex cable, I connected red to red, black to black and white (neutral) to green (ground/on oven).

It would have been helpful to have some photos with labels and some better information about the wiring, since that is really the most important part of this and so critical. The wiring info provided seemed to brief and not clear enough even though I read through it several times. The markings on the back of the oven L N T (with circle) were not defined in the manual and I had to figure out the T with two lines over the horizontal part, was ground. Below those markings was another wire connection marked with the Ground symbol. So, TWO wire connections had a ground symbol! I chose one, the lower one, which seemed to be the best situated one for ground and went with it.

We had to widen the opening about .75" in our cabinet to accommodate the oven. We sealed off both kitchen entrances with plastic sheet to keep the dust from the saw from going everywhere in the house. Once installed, it fits flush except for the top where there is a 4" gap due to the old oven being taller. No fault of the product. We will fit something there or make it into a shelf for cookie sheets, baking pans, etc.

Cons
Not UL Underwritten
The clock is 24 hour, not 12 hour. Why?
Temperature adjustments are made in 9 degree Fahrenheit increments! Why? This is digital, why can't you just select the temp you want?
Timer MUST be on for the oven to operate
Manual: "The oven should be cleaned after every use"
One rack, not two as it should

There was no explanation for the convection aspect of this oven, regarding cooking times. For example, conventional vs. convection vs. "true" convection. True convection uses a third heating element. This oven has those three options.

There was some info advising users to turn off the heat sooner, so as to use residual heat to finish cooking, resulting in energy savings.

We will use our Empava convection oven over the next several weeks and I will be updating this review.

Update February 26, 2019
We have cooked two turkeys and they have turned out great. Also, cookies, banana bread, casseroles and lots more. As far as function goes, it gets 5 stars. It works as it should, comes with some extras (a pan, we haven't used the rotisserie), but are disappointed that it only has one rack, not two. It lists only one rack in the Amazon listing, but it seems cheap not to include two. My wife wants a second rack.

I almost returned this within the return period. *

I noticed the rubber door gasket sagging significantly and thought something was amiss. I contacted Empava and they got in touch and we emailed back and forth. According to one of their service techs', the door gasket is held at each corner. The gasket originally fit in the groove surrounding the perimeter of the opening. It "fell" out of that area and was simply held by something, not sure what. Anyway, it was alarming to me, but apparently the gasket still functions to seal in heat when the door is closed. YMMV

* Note: if you purchase items on Amazon in early November you have until the end of January to return the item!

I will update again from time-to-time.

I am not an employee or agent of Empava, nor have I received any compensation for my review.

If you have found this review helpful, please indicate that below.
Thanks😊

Pros:
The appearance is astonishing. I've got at least a dozen compliment. The use is simple, and doesn't require reading the owners manual (at least for me). It doesn't need any ventilation so it can fit in a really tight space. The price is really beating other brands.
Now, Cons:
Came with very slight almost un-noticeable dent on the back of the unit ( which is fine with us but may not be for others). The heating time takes slightly longer, probably about extra 10 minutes than gas oven.

Overall:
I still love it and definitely would recommend this product to anyone if they ask.
Leer más
A 35 personas les resultó útil
Informar de un abuso
Traducir opinión al idioma Español

Michael D
4.0 de 5 estrellas Overall been fantastic and cooks really fast.
Reseñado en los Estados Unidos el 17 de enero de 2019
Estilo: 24WOC17.Compra verificadaRecompensas del primer reseñador(¿Qué es esto?)
Takes a little while to warm up but after it does it cooks in half the time of my conventional oven on convection mode.
The front is a reflective glass but not bad looking.
The wire it comes with is too small to handle the 30amp recommended breaker so I recommend changing it to a 12 gauge wire or larger.
Overall it’s worked great and don’t have any problems with it. Just keep an eye on whatever you put in it because it could very well burn it. This thing cooked cookies in 5min once!
I recommend to anyone looking for a simple solution rather than spending thousands for other models.
Leer más
A 40 personas les resultó útil
Informar de un abuso
Traducir opinión al idioma Español