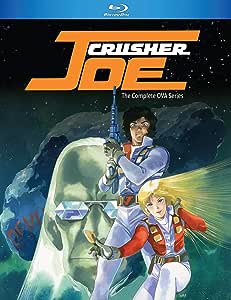 1080p high definition, region A disc. In the 22nd century, mankind has expanded into outer space. However, it was the Crushers who paved the way, performing jobs that ranged from terraforming to asteroid busting, warp lane plotting to transportation. These days, the Crushers still accept jobs of all kinds, so long as they're legal and ethical, and Crusher Joe's team is the best in the business! In this set of two OVAs, Joe, Alfin, Ricky, and Talos, along with the robot Dongo, take on jobs that require all the tools, tricks, and knowledge that the Crushers are known for. Of course, no job ever goes as expected. Whether it's rescuing prisoners trapped on an icy asteroid in a decaying orbit, or extracting a military officer charged with the safe keeping of a weapon of mass destruction from the clutches of insurrectionists, it's all part of the job to a Crusher, and that's before the mission goes sideways! Includes both OVAs, A Trap of the Frozen Jail and The Final Weapon ASH! Japanese language, with English subtitles, and the English dub!

Raisuli the Magnificent
4.0 de 5 estrellas Interesting scifi offering
Reseñado en los Estados Unidos el 19 de septiembre de 2020
Compra verificada
This two episode blue ray disc gives us two law enforcement oriented scenario; one regarding an asteroid turned into a prison that suffers some kind of disaster, and another regarding a planet that has hostile AI and a weapon that puts all others to shame.

The first episode is more or less a slow mover that tries to recapture some of the magic from the feature film. The second episode is an action adventure film that has shades of a spy movie and outer space opera combined.

Both are aimed at the mature teenage male (mature high school male to post college) with some cartoon nudity and some mild sexual tension. They're kind of interesting for what they are, and have strong plots. The blue ray is a far superior offering to the original VHS and even the DVD editions.

If you're a Crusher Joe completist, then this may be worth getting.