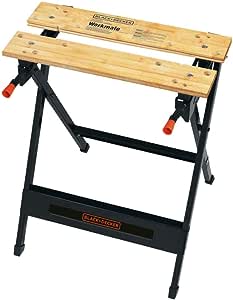 Carmon
5.0 de 5 estrellas Easy Does It
Revisado en Canadá el 23 de agosto de 2017
Compra verificada
Years ago I had two Workmates, but tomorrows are not always richer, and along the way they disappeared. Watching my money now, I recently purchased a different nonWorkmate bench from a big-box store. That bench was a disappointment. It was rated at 200 pounds but was made of terribly flimsy steel. It cost me about the same ($60-ish) as this B&D 125 model, and I am SO GLAD I took the other one back to the store for a refund. This new B&D 125 is a very nice compromise between "kitchen-useable" and good strong steel. I live in an apartment. You get the idea. DETAILS for CONSTRUCTION:

(with apologies to Amazon for my too-many edits)

I was being cautious, and I took my time putting this together. Easy does it; DO take your time. Here are Watch-Out-Fors. Letters such as (F) relate to B&D letters in the B&D instruction manuals.

1. Good instructions from B&D come with your workbench, plus B&D has a nice video plus there is a PDF, virtually word-for-word the same. I had both the PDF and the video on my computer as I assembled the workbench.

3. There are two (F) spacers. Identify them right when you begin, because you need them in Step 3, and the instructions mention them just once and glide on by. Don't see them as "left-overs" at the end. (If you do, no big deal; you can still put them in.)

4. Assemble this workbench gently. You can tighten everything later on.

5. There is a caution about the two (E) locking knobs. GO EASY ON THESE, during assembly and use. They are only plastic.

6. Steps 6 and 7 require three hands, or else, if you have hands like my wife says are suspiciously good at unfastening bra straps single-handedly, then you can do these steps rather enjoyably. Be in a good mood. They don't call us handymen for nothing.

7. NOTE: Still dealing with Steps 6 and 7, the four (B) self-threading hex head bolts will be ever so happy you were ready with your 13mm socket ratchet. The plastic included part (U) nut driver is fairly good for its being plastic, but here you really want steel.

8. Step 9 wants you to use a hammer twice, to force a roll pin into each of two plastic parts. WHOA!! I would not go gentle into that good night; meaning, I WOULD NOT WHACK AWAY WITH A HAMMER at a delicate unbraced plastic part mostly in mid-air. So, STOP your assembly here, and carefully lie your almost-finished Workmate down on the kitchen floor or wherever. Find a small end of 2x2 or 2x4 and snug it under the handle so the plastic part can take the hammer blows. Be sure to manually pull the screw assembly (N) as far out away from the parts you could damage. (You'll understand when you do this.) Use a nail to rotate the same (N) piece so the tiny hole points straight up. Now use a scrap of hardwood or any kind of steel thing to give you a few inches of HEIGHT, and then try your hammer blows. Guess what: it works!

You want to think ahead, and do all this with patience. Naturally: you're a carpenter.

The steel on this Workmate is WAY stronger than the silly steel on the item I returned to the store, by the way. And the 350-pound limit shows in print right on the Workmate 125's surface, so I think it really is capable. Take a few more suggestions from another video online, especially one by Marty about his "tricked out" Workmate 400 (a bigger version) with his additions such as his home-built Bench Bull.
Leer más
A 11 personas les resultó útil
Informar de un abuso
Traducir opinión al idioma Español

Sumonto Choudhury
5.0 de 5 estrellas Good deal
Revisado en India el 13 de julio de 2017
Compra verificada
I can finally stop using my study table for DIY's around the house... my wife is thrilled! The best thing is the folding and stacking it flat against the wall. Easy assembly, all parts, nuts and bolts included with lucid directions. The vise is a great idea! You'll need some clamps and you are ready to hammer and saw! Good deal.
Leer más
A 3 personas les resultó útil
Informar de un abuso
Traducir opinión al idioma Español

JZ
3.0 de 5 estrellas Very light duty, weak plastic parts in critical locations
Revisado en Canadá el 15 de abril de 2015
Compra verificada
The plastic thumb screw used to lock legs in open position cracked the first time I used it so now it's just sort of stay open by gravity. The table surface is connected to the frame/screw with hollow plastic blocks, so all the clamping force and shock are absorbed by them.

At least it was't expensive, just remember to not put any significant force on it.