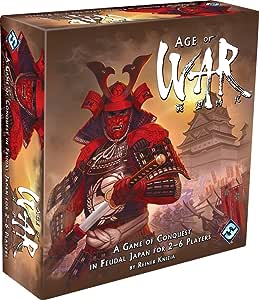 Jonathan
4.0 de 5 estrellas Simple dice game that needs a rules fix
Revisado en el Reino Unido el 16 de abril de 2016
Compra verificada
Here's a simple but addictive dice game from Reiner Knizia with a Japanese theme (it's a re-branding of the old Risk Express card game). A set of cards on the table represent castles to be captured. They are colour-themed into different clans. Players take it in turns to attack castles by rolling 7 special dice.

The dice have 6 symbols: a "daimyo" (king, a red face), archers, cavalry and 3 infantry worth 1, 2 and 3 points each. The same symbols are shown on the castles in different combinations over 1 to 4 rows.

After a roll you allocate dice to match the symbol requirements of a row on one of the castles. Then you roll again with the dice that are left and try to match the symbol requirements of another row on the same castle. If you can't match symbols on a row, you set aside one die as "casualties" and try again. Eventually you either capture the castle or run out of dice. Then the next player rolls.

The castles are all worth points and once the last castle on the table is captured, players add up their points to determine a winner. The game should take no more than 15 minutes.

Two rules complicate this simple process (which other reviewers rightly compare to the rather-more-complex  Elder Sign Board Game ).

Firstly, you can attack and capture castles held by other players. Each castle's top row has an extra "daimyo" symbol that you ignore when attacking castles on the table but have to match when stealing castles from rivals. This makes the top row tougher to fill.

Secondly, once you have completed a set of all the castles of a particular clan (colour), you flip the cards. The set is worth slightly more points than the individual cards and, more importantly, completed sets cannot be stolen from you by rivals. One of the clans (Oda, yellow) has 4 castles, making it particularly hard to collect the set, but it's worth 10 points if you do. Another clan (Shimazu, green) has only a single castle (Kumamoto), so if you capture that you automatically flip it; it's worth 3 points but you need to fill 4 rows to claim it, which is tricky.

That's it. Players grab cards from the table and then from each other. Whoever is ahead on points will try to end the game by capturing the last castle on the table. Once they succeed, game over and score up.

Lots of other reviewers have praised the game for being simple and fun. Unfortunately the game has a flaw. The endgame "spins" and can become very frustrating. It often happens that one player is far ahead on points and the others look on as this person tries and fails to capture the last castle, turn after turn. This lack of a dramatic and decisive endgame is a flaw in a lot of Knizia's elegant and maths-based designs. Even before the endgame, Age Of War can get bogged down as players repeatedly roll and fail to capture castles. Fortunately the forums on Boardgamegeek have suggested 3 simple house rules.

1. Divine Wind
If your first roll produces all the symbols you need to capture a castle or steal one from another player, you can do this without needing to acquire the castle one row at a time. This only applies on your first roll. This rule speeds the game up immensely and reduces the number of failed assaults.

2. Shogun
If your first roll matches the top row of a castle on the table along with the additional "daimyo", you can fill that row as if you were stealing it from another player. It's harder to capture a castle this way but if you succeed, you can have another turn - but only to attack or steal another castle of the same clan (colour). You could perform this multiple times. Shogun only applies to attacking castles on the table, although you could use the free turn to try to steal a castle of the same clan from another player. Shogun can be combined with Divine Wind. This rules makes it easier to complete sets.

3. Siege & Revolt
Whenever you fail to capture a castle on the table, turn the card anticlockwise. A card turned this way represents a castle under siege. Once the card has been turned 4 times (back to its starting position), it is "in revolt" and is moved to one side. A castle in revolt can only be captured by matching the extra "daimyo" on the top row (as if it was owned by another player) but, crucially, it is not considered to be "on the table" as far as ending the game goes. This rule brings games to a swifter conclusion because, after 4 failed assaults, the last castle will go into revolt and the game will end. This makes a winning strategy for a player ahead on points.

I don't take any credit for these house rules but I've tried them out and they work beautifully. You can add all of them or some of them, as you like. They turn a charming but slightly unsatisfying game into an exciting and fast-paced game that's a bargain at this price.
Leer más
A 24 personas les resultó útil
Informar de un abuso
Traducir opinión al idioma Español

Dean
4.0 de 5 estrellas Flawed, but a great gateway board game
Revisado en el Reino Unido el 2 de noviembre de 2017
Compra verificada
This game would be a 3* if not for the impact this game has had on players new to board games. Age of War, a re-branded version of Risk Express, shines during its first and maybe second game, but after that, its repetitiveness really begins to show as the game is fundamentally rolling dice every turn to obtain the same cards over and over every game.

However, whenever this game is left out, it consistently sees play among people who would otherwise have very little interest in board games. From here, they can move onto similar games with more depth such as King of Tokyo. I wouldn't buy it to play with family over and over, but if you're in a social setting where people come and go, this is a solid game to have.
Leer más
A 4 personas les resultó útil
Informar de un abuso
Traducir opinión al idioma Español

Nia
5.0 de 5 estrellas Brilliantly unassuming and surprisingly competitive
Revisado en el Reino Unido el 25 de abril de 2020
Compra verificada
This is one of my all time favourite games due to its simplicity (and how easy it is to carry around).

It's so easy to get the hang of, the element of pure luck with dice throwing adds tension as you never know what you're going to get and all players get really invested in everyone else's rolls, and the fact you can attempt to steal cards from other players really brings out everyone's competitive sides which is so much fun.

It's worked equally well when I've played it over drinks with friends and one on one with my mum who isn't a card/board/dice game enthusiast.

Jack Baylor
5.0 de 5 estrellas Loads of fun, low learning curve, great price
Revisado en el Reino Unido el 26 de agosto de 2020
Compra verificada
This game is an absolute blast, ideal for two or large groups, really easy to learn and yet it can be played with great skill! Superb as an entry point for non-gamers, and a brilliant simple diversion for those more used to multiple hour-long board games. A must have for every gamer and non-gamer alike (don't worry, you'll join the dark side soon enough)
Leer más
Informar de un abuso
Traducir opinión al idioma Español